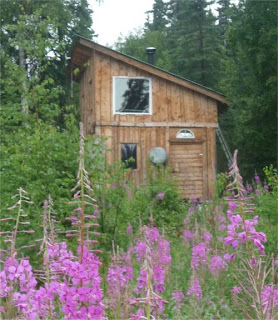 A few months ago I stumbled across an ad for a remote Alaska homestead, 39 acres, no road access, about 20 miles south of Denali National Park. "1500 feet of creek frontage - large stream with plenty of fishing" the ad said, "This is a complete turn-key homestead...SkiDoo Tundra in good running condition. However, bears chewed the gas tank off." I looked it up on Google Earth. The access was flying to a lake about a mile from the cabins.

I contacted the fellow with some questions about the shape of the cabin, hunting, fishing and hiking opportunities and whatnot. The lake was unlandable that time of year, in May, with mushy ice. It's usually unwise to buy land sight unseen, but after doing what research I could, I decided to take a chance.

It wasn't until August 3rd that I could fly out there. The pilot landed the small Super Cub, and it took only a minute or so to unload my small pile of gear and then he flew away. It would be more than three weeks before I saw another person.

That area is thick country compared to Fairbanks, with patches of alders and devil's club along with birch and spruce. But there was a flagged trail laid out to the cabin and in less than an hour I entered a meadow of fireweed in full bloom and caught my first sight of the cabin.

I was excited but had mixed emotions. Most truly remote cabins have debris around. It's a lot of work and expensive to fly things back out, and you never know what might be useful. Plus it's not like you need to impress people dropping by. There were broken sleds and tattered tarps and bear-chewed gas cans and more around the cabin. 2/3 of the tarp roof of one cache was in tatters with the tools exposed to the rain. The roof had partially collapsed on the second shed, with hundreds of pounds of rainwater in a giant pool crushing down what was left. Outside the rain poured down from a dreary sky and at that moment I was unsure of how good of a deal I'd gotten.

After packing the second and final load of my supplies to the cabin I got into dry clothes and rolled out my sleeping bag and read the rest of the day. The rain pattered on the good steel roof of the cabin. A good roof was a big plus.

The next day I repaired the roof of the small cache and drained the water off the second shed. The day after I cut and peeled some spruce poles for the roof and soon the second shed was also waterproof. Each day things took shape a little more as I explored, cleaned and organized. Unexpectedly there was a 10 gauge double-barreled shotgun there, "loaded for bear" with slugs. Also a .22 rifle and a bow. Fishing rods, hand saws, several chain saws, axes, at least a hundred pounds of assorted nails and screws, a brush cutter, lots of food, rain gear, boots, hundreds of books, radios, clothing, a solar system, a generator and much more. It was fun discovering new stuff. The original homesteader had truly accomplished a staggering amount of work building that cabin and homestead in that remote area.

I would listen to the radio almost all day as I worked. There was a long wire serving as an antenna so reception was perfect. The solar panel powered the radio. When two sunny days were predicted, I left in the morning on an expedition to climb a mountain peak about 6 miles away. It was a tough walk at times. But I found an old cabin and when I finally made the summit of that mountain late that evening there were stunning views of the Alaska Range, including Foraker and McKinley. 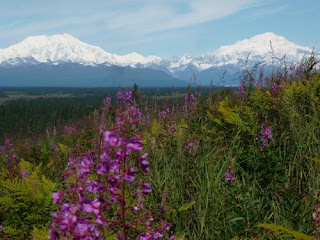 At the end of three weeks at the cabin things were neatly organized and it was time to head home. There were already claw and bite marks from grizzly and black bears around the corners of the cabin, so I made several "nail boards" with nails sticking out every which way and nailed them over the front door to discourage bears from breaking in.

I packed my inflatable kayak down the creek a ways and then inflated it and paddled and dragged down to the first confluence. There I could see salmon in the pool. Right off the bat I caught a big rainbow trout, then a silver salmon and a chum salmon and grayling.

Shortly after continuing I found a moose antler in the creek, and shortly thereafter another on a gravel bar next to a pool full of salmon. 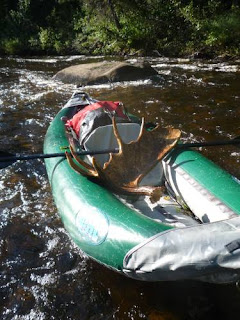 I had many portages to do around and over logs, but otherwise made steady progress. What a beautiful little creek. The next day I made it down to the Yentna River. Near the mouth of the river I began seeing seals that had swum up the Susitna River after the salmon. As I began deflating my kayak a power boat was coming down river so I held up my "Willow" (a small town) sign and he swung over and gave me ride up the river and into Willow which was right on his way. For his kindness I donated some gas money. In the bush people really do look out for each other.

It turned out to be a great adventure and I look forward to returning. I'd like to thank Frank, the original owner, for the huge amount of work he did building that homestead, and for his generous advice based on his years of hard-won experience in wilderness homesteading.
Posted by Buck on Wednesday, August 31, 2011