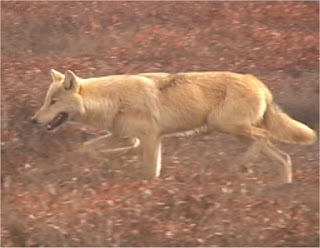 Sometimes in the outdoors there are extraordinary experiences that stand out, and even when they are happening you realize it's something never to be forgotten.

Recently on my trip to the North Slope, I was driving down the Haul Road and saw a wolf in the distance, trotting across the tundra and angling towards the road. I grabbed my camera, rolled down the window, and tried to time our convergence for a good photo. As he drew nearer I was surprised to see his color, a beautiful shade of gold that I'd never seen before in a wolf. He trotted along confidently as I took a few photos. When I stopped he became suspicious and quickly loped across the deserted gravel road and trotted across the tundra on the other side, stopping to pounce upon a mouse. He scanned the countryside as he slowly disappeared in the distance.

The next day I was far off the road, glassing the open hills and creek bottoms for caribou. When I lowered my binoculars, a white dot moved across a hillside well over a mile away: a wolf. Through my binoculars I watched as he angled my way. Leaving my hilltop I kept an eye on him as I moved to intercept his route. When he got to the creek he jumped on something, rolling around in the high grass, appearing and disappearing, his bushy tail flipping in the air from time to time. He'd be gone for a bit, then his head would pop up again. When he headed upstream and disappeared into the willows he was still a mile away. As I hurried along for another look I continued to look around, and was startled to see him suddenly trotting behind me, through the knee-high willows only a hundred yards or so away.

It took a moment to realize what I was seeing. The light was different, but I realized he wasn't white at all, but a pale yellow. It HAD to be the same wolf. When we made eye contact he paused for moment, then turned to run. The distinctive black spot on his tail confirmed his identity. When he stopped again to gauge my reaction it's as if he recognized me, too. Then he loped away over the hilltop and was gone.

Our last encounter had been about fifteen miles away as the crow flies. What were the odds that he would have changed direction after that first meeting, and come directly to me for another rendezvous the very next day? I suppose there was no reason or explanation, it just was.
Posted by Buck on Thursday, October 06, 2011 7 comments