Waterborne Giardia for Backpackers: No Myth

Years ago I twice contracted Giardiasis, in consecutive years. Since the second time I have been very careful about treating water, and had no trouble for many years. However, before I left on my five month thru-hike of the Pacific Crest Trail last year, I read this article. Giardia lamblia and Giardiasis With Particular Attention to the Sierra Nevada. It made a very convincing case that the odds of getting Giardia from backcountry drinking water was so low it didn't pay to worry about, at least in the High Sierras, as long as some attempt was made to select water sources. Instead, a focus on hygiene was stressed. So on the PCT I usually didn't treat my water. But I was the most careful I've ever been with hygiene in the outdoors. Unfortunately I got so sick in the Sierras that I was curled up on a mountainside, and it took me most of a day to make it the four miles (only four, luckily) to the nearest road. I partially recovered, after a full day of rest, then a week later became very sick again. Luckily I was at Mammoth Lakes. My physician diagnosed Giardia. He told me he treats many backpacker Giardia cases and doesn't report it. He laughed when I told him about the article I read. Other hikers have told me their doctors told them the same. A cursory scanning of Pacific Crest Trail sources shows about 12 thru-hikers a year (out of around 300) report getting giardiasis. And despite statements to the contrary, most are diagnosed by lab tests and/or physicians. With 2/3 of people being asymptomatic, the true number is likely much higher.

Here are some undisputed facts. Giardia is very common. There are about 2 ½ million cases a year in the United States. Giardia cysts may be ingested with contaminated food or water, or acquired from unwashed hands. Most sickness experienced by backpackers is undoubtedly caused by things other than Giardia. The incubation period of Giardia is usually 3 to 25 days or longer.

What are the odds of getting Giardia while out backpacking? Anecdotal evidence is extremely undependable, but here are two relevant studies:

Twenty-five...campers had stools examined before and after a subsequent hiking trip in another area of Utah; none had Giardia cysts before, but 6 (24%) had them after return. This source goes on to say Questionnaires returned by 133 of the campers showed that 5% had an illness compatible with giardiasis within 2 weeks after their trip. These surveys show that campers exposed to mountain stream water are at risk of acquiring giardiasis.

In another excellent study, 2 of 35 people got Giardia, but were asymptomatic. A third had Giardia symptoms, was treated for Giardia, and quickly recovered. Giardia is often not detected with a single test. So it is certain at least 5.7% got Giardia, and it seems more than likely that 3 of 35 got Giardia, for a total of 8 1/2%.

Another study shows a strong correlation between not treating mountain water and getting Giardia:

A one-year retrospective laboratory survey in Colorado revealed that 691 (3%) of 22,743 stool examinations for ova and parasites were positive for Giardia lamblia, a higher percentage than that reported from surveys outside of Colorado. The majority of infected residents who were surveyed had experienced an episode of chronic watery diarrhea (median duration 3.8 weeks) with bloating, flatulence, and weight loss (averaging 5.1 kg), and had responded to a course of metronidazole or quinacrine. A statewide telephone survey of 256 cases and matched controls identified: 1) and increased incidence of giardiasis in persons between the ages of 16 and 45, p less than .001, with males and females equally affected; and 2) a higher proportion of cases than controls who visited Colorado mountains (69% vs. 47%), camped out overnight (38% vs. 18%), and drank untreated mountain water (50% vs. 17%), p less than .001. Also identified was a correlation between the seasonal distribution of cases and degree of fecal contamination of mountain streams. These results indicated that G. lamblia is endemic in Colorado and that drinking untreated mountain water is an important cause of endemic infection.

(Note, after I wrote this post I ran a poll on the Alaska Outdoors Forum. That poll also showed that people who didn't treat water contracted Giardiasis about 3 times as often. What actually happens in the real world trumps theories of what should be happening.)

The skeptics of waterborne Giardia transmission for backpackers tend to rely on the low numbers of cysts usually shown in backcountry drinking water, and statements to the effect that 10 or even 20 cysts are required for an “infectious dose.” But those statements are all based on one very limited study, (cited in Waterborne Transmission Of Giardiasis Proceedings Of A Symposium Held At Cincinnati Ohio On Sept 18-20, 1978 starting on page 64) a key part of which is shown below: 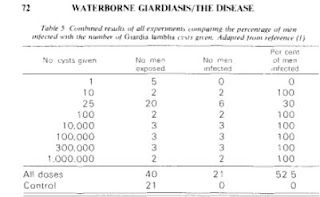 There is no biological reason why single cysts of Giardia would not also be infectious. The FDA says: one or more cysts may cause disease. One cyst compared to the 10 cysts Rockwell used to calculate the risk for water in the Sierra. By the time Zell did his study a few years later they were adjusting  for a cyst recovery rate of only 10%. If  we similarly adjust Rockwell's cited cyst counts and change the minimum infectious dose to one, that's two orders of magnitude! Something to ponder is that An infected person might shed 1-10 billion cysts daily in their feces...

The people who claim to have drank untreated water for years without getting sick are probably right. About 2/3 of Giardia carriers are asymptomatic. Others are lucky or resistent. Nonetheless, getting Giardia in the backcountry is very common.

Anyone may become infected with Giardia. However, those at greatest risk are:
(Giardia) Cysts have been found all months of the year in surface waters from the Arctic to the tropics in even the most pristine of surface waters...In Wisconsin, Archer et al (1995) found that all 18 streams sampled were positive for Giardia; the highest level was 2,601 cysts/100 L from a stream characterized as pristine. That's 26 cysts per liter. In other words, you'd probably get Giardia if you were drinking from that stream. The EPA goes on to say Hancock et al. (1997) collected 463 groundwater samples from 199 sites in 23 states in the United States; Giardia cysts were found in 14% of the springs. Pick your water sources and you'll be safe? Maybe not.

One of the most egregiously misleading papers I've seen on this topic is Giardiasis as a threat to backpackers in the United States : a survey of state health departments
As quoted by Robert Rockwell: “Neither health department surveillance nor the medical literature supports the widely held perception that giardiasis is a significant risk to backpackers in the United States. In some respects, this situation resembles (the threat to beachgoers of) a shark attack: an extraordinarily rare event to which the public and press have seemingly devoted inappropriate attention.”

Giardiasis is widely under-reported because backpackers and campers normally seek medical attention one at a time... "Several backpackers appear weekly at Centinela Mammoth Hospital in Mammoth Lakes sick enough with giardiasis to need urgent care, said Dr. Jack Bertman, an emergency physician, who noted, 'We publicize it a great deal more in Mammoth.' " As rare as shark attack Dr. Welch? You know how many cases of Giardiasis were reported in that county (Modoc) in 2008-2010? Zero. Including my case. In that single county backpacker giardiasis was, technically, infininitely under-reported.

Welch looked at outbreaks. He says Nineteen of these outbreaks were attributed to consumption of contaminated drinking water; only two outbreaks were reported among individuals identified as campers or backpackers Giardiasis, although common among backpackers, rarely meets the definition of an outbreak. The Welch paper is very, very misleading. In Rockwell's paper he says this about water in the Sierra: One conclusion of this paper is that you can indeed contract giardiasis on visits to the high mountains of the Sierra Nevada, but it almost certainly won’t be from the water. So drink freely and confidently. From a more recent survey in the high Sierra which included seemingly pristine water: Nowhere is the water dirtier, he discovered, than on U.S. Forest Service land, including wilderness areas, where beef cattle and commercial pack stock — horses and mules — graze during the summer. There, bacterial contamination was easily high enough to sicken hikers with Giardia, E. coli and other diseases." "Drink freely" is bad advice.

A major theme in the Rockwell paper is that Sierra water on average is purer than San Francisco and LA water. Except for two big factors:  these cities filter and/or treat their water supplies, so they are undoubtedly much safer than untreated Sierra water. And hikers don't drink an "average" canteen of water. Their water bottle might contain no Giardia cysts, or they might get enough cysts to send them to the hospital. Been there, done that, more than once. Won't do it again.

It's also important to recognize there are other protozoa, viruses and bacteria that can and have sickened backcountry travelers drinking untreated water. Some people have gotten by for long periods of time without treating, but the odds have a way with catching up with people. Here's a quote from an article about Scott Williamson, who has hiked the Pacific Crest Trail 13 times or more (!!!) Williamson does not filter or treat his water. 'I’ve been sick multiple times, I have had giardia…' (and then he ticks off a list of other parasites, but your trusty reporter was too dumbfounded to write them all down).'I am very selective about my water. If it looks like a heavily used area I will try to find cleaner water, but I have had to drink some nasty water. It saves time, I just dip and drink.' He does add, 'If you don’t want to be sick at some point, you have to always treat your water.'

Although giardiasis makes some people very sick indeed, it is treatable. If I somehow got in a position where I had a choice between drinking suspect water or getting dangerously dehydrated, I'd choose the former. Most stomach upsets resulting from backpacking are not Giardia, and hand washing before eating is important.

You should make your own choices about water treatment, but it's important to realize that the risks of getting Giardia from backcountry water are no myth.