Return to the North Slope of the Brooks Range 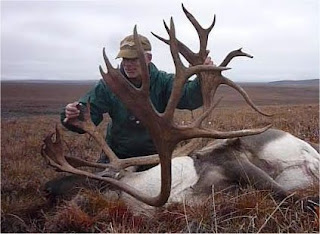 Late last night I returned from a wonderful experience. Leaving Sunday I made the long drive north, up the Haul Road and over the crest of the Brooks Range towards Deadhorse. Fall colors were just past their peak in Fairbanks, but in the 400 mile drive ebbed to the faded reds and browns of late fall, with the leaves all fallen. The higher elevations of the Brooks Range were dusted with new snows. Atigun Pass was already deep with winter snow and ice. On the north side of the pass there were many snow-white Dall sheep feeding just below snow line. A fat grizzly bear loped down the mountainside just beyond.

In another hour a few scattered caribou appeared here and there. I was completely out of game meat in Fairbanks and was looking for a caribou to fill my freezer. Rifle hunters must be 5 miles off the Haul Road to hunt. It's a good rule and one that dramatically reduces hunting pressure. Just before nightfall I set up my camp just over 5 miles from the road. Early the next morning I climbed to a hilltop overlooking several little lakes and streams, with the higher hills beyond mostly hidden by low-lying clouds.

In late morning I had a remarkable encounter with a wolf I recognized, (a story I'll save for another time.) Around 1 PM I spotted a band of caribou about 1-1/2 miles a way: cows, calves and young bulls. They disappeared for a while and next time I looked they had been replaced by a half dozen magnificent mature bulls, their manes white against the tundra. It can be hard to catch up with moving caribou, but you never know when they might bed down. As luck would have it, they did.

When I carefully crested the gently sloped ridge they were still bedded, with one or two occasionally rising to feed before lying down again. The other band of caribou appeared on the low ridge above. When it looked like they were heading toward the creek, I crawled back out of sight and moved to cut them off, but they bedded again. Finally after the third long crawl I was within shooting distance. When my selected bull was clear it was a quick, clean kill and he was down. The other caribou scattered when I stood up, a small forest of swaying antlers.

It was hard work getting him out, but well worth it. What a treasure to have a place like that left in the world: truly wild animals and the sweep of beautiful lonely wilderness. How many places can a person set out alone from their front door and see moose, wolf, Dall sheep, caribou and grizzly on trip of a few days? What is it worth to have the opportunity to experience it?
Posted by Buck on Friday, September 23, 2011 1 comments